Friday, April 6, 2018. Sue and I arrived in Santa Fe, New Mexico to stay with Sue’s Aunt Jane. Jane is Sue’s Mom’s sister. She lives in an adobe style home just outside of the city. It is Friday night and we have driven from Ft. Stockton, Texas. We had dinner and great conversation as both Jane & Sue are remarkable story tellers, sharing stories as they hadn’t seen each other in about thirteen years. There was lots to catch up on.

We had a show booked in Las Vegas, New Mexico on that Sunday that had cancelled so we were able to enjoy the entire weekend with Jane. On Saturday, April 7, Jane took us to the Center for Contemporary  Arts and we saw an exhibit by two artists, Ceil Bergman’s, The Linens, and Tom Joyce’s, Tc- Curie Point. The Linens were large works that Bergman did over a number oy years. It was impressive to walk into the main exhibit room and see so many large works side by side. I was struck by what I kept calling her question bone image that recurred in many of her linens.

This is entitled, For Duchamp (After the Large Glass) http://www.cielbergman.com/xl2xd1ils9dijj1dj5rtm8jy6udpl6

The Tom Joyce exhibit was different. The metal artist worked for forty five years and the exhibit suspended nearly 25,000 lbs of equipment, supplies, tools and other objects that were once incorporated, made, used and/or laid to rest in the artist’s studio. It was dark in the space and I was a bit nervous walking under all of the weighted materials.

After leaving the exhibit, we went into downtown Santa Fe, had a rest and chat at a coffee shop and then browsed a few shops and smaller galleries before heading back to Jane’s.

We left Aunt Jane’s in Santa Fe and headed to Tucson, Arizonia. We had a show booked on April 11 at the Monterey Court, an open air courtyard with a nice stage, lights and sound. The courtyard is surrounded by small shops and art studios and festively decorated. Thanks to Greg Haver and everyone at the court. That was one court room I’d like to visit again. Sue and I camped that evening just north of the city. The desert is great for sleeping as the temps drop when the sun goes down. We did hear coyotes yipping before we fell asleep. They were close and the clarity of the yips in the night air were as chilling as the air itself.

The next morning we got out early and started making tracks to California. Our next show was on April 15 in Thousand Oaks at their library. That gave us a few days to get there and we got to stop at Joshua Tree National Park for one evening. We entered the park off of Interstate 10 near Cottonwood Springs. We were hoping to camp deep inside the park but all of the sites were booked. There were a few sites left at Cottonwood Springs thankfully. We arrived early enough to set up camp and take a hike. We got back to camp and fixed a pinto bean dinner with a side of sustained winds that made it difficult for our Snow Peak stove to stay burning. It was a beautiful night for star gazing but the winds continued throughout most of the night, making sleep hard to find because of a flapping tent. It was comical. Sleep did eventually visit but it was short lived. The next morning we drove through the park, stopping along the way for photo opts and settled on breakfast at the Crossroads Cafe near the west entrance. The coffee, tea and grub were a welcome treat after a night of sustained thirty mile per hour winds. Oh, the wind, the wind, the wind.

We left the Crossroads Cafe, stopped by Pioneer Town for a dusty peek and then we were off to Malibu for our visit with Jane and Tom. Jane is Sue’s cousin, whom she hadn’t seen in many years. Her husband Tom plays the tuba and it made me smile to hear him practicing. I love the tuba. Tom is a music editor for film but also plays in the community orchestra. They hosted Sue and I for a week and we had a wonderful time with them. We had our own little film fest and watched a couple of Terrence Malick films and the Florida Project. Thank you Jane and Tom, a house filled with beauty, music, story and then some. And thanks for letting me have my way in your kitchen. Sue and I got to visit a few must sees in Malibu, Paradise Cove, Point Dume and walks in the hills. Here are a few pics. 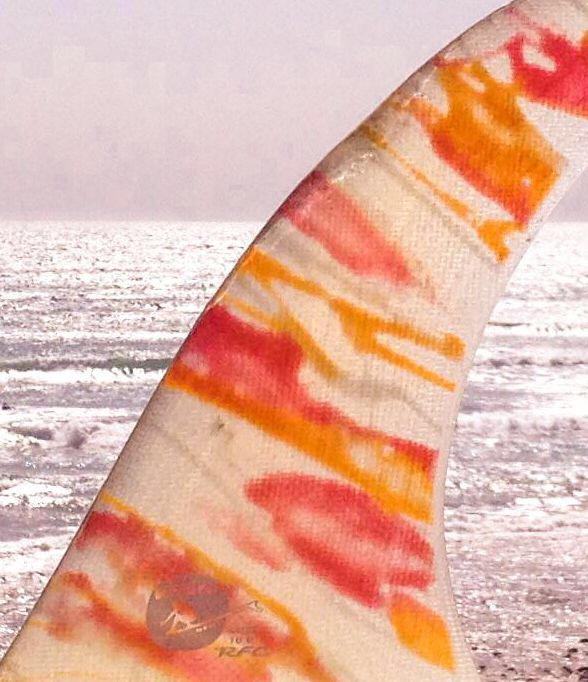 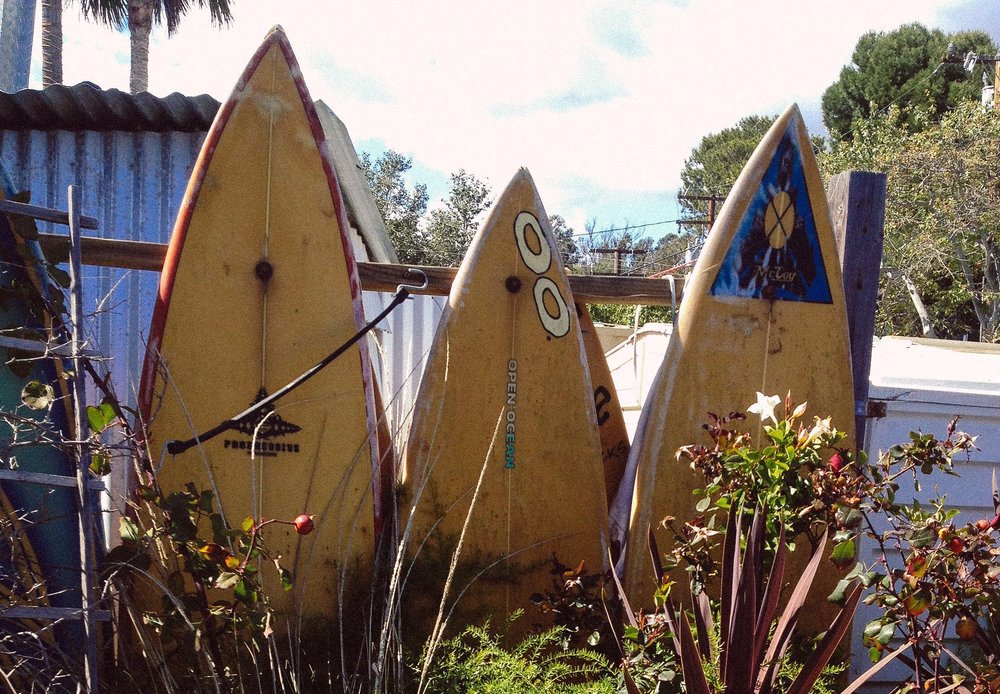 Our show at the Thousand Oaks library on Sunday, April 15 was well attended and my very first solo California gig. It’s a wonderful concert series and got to see some friends, Merlin, Debbie and Russ. Sue’s cousin, Jane, was able to attend and see Sue perform for the first time. It was a great start to our California shows.

After staying with Tom & Jane, we headed over to Merlin & Debbie’s who live in a house that they built in Thousand Oaks. We stayed just a couple of days and had the best time. We got to go with them to a little league baseball game that their grand kids were in. We shared songs, drank tea and managed a wonderful hike into the mix. Thanks to Debbie and Merlin for sending us on our way with a bag of Yerba Matte. It’s late July and I am still brewing a cup every morning.

Next we were off to Sherman Oaks for a hang and a song with good friends, Craig and Ali. Craig is Craig Eastman, the best darn fiddler in the multiverse, whom I met back in 2015 while working on a record with Jeni Hankins and Ali is Ali, who always brings out the best in everyone. Thank you Ali for great conversation and creative ideas and punctuations. My friend, Dillon O’ Brian introduced me to Craig and I am ever grateful to him. More on Dillon in a bit.

We got to do some rehearsing with Craig in his fab studio for some shows coming up in the central coast near San Luis Obispo, or SLO as it is called. This was going to be the first time I got to play some shows with Craig doing my songs. We had the best time exploring arrangements, as Craig always brings layers of expression and emotion to every thing he is a part of. There is song and dance in every cell of Craig’s being. He is a song and dance man. His music spills effortlessly into the flow. Their dogs, Buster and Willie, always present, helped us along, with intermittent walks being ever watchful, mindful and cute.

Craig, Sue and Billy rehearsing again in Atascadero, near Slo…

The Tuesday night before we headed to the central coast, Sue and I got to see my good friend, Dillon O’Brian at his musical gathering at Ireland’s 32 also in Sherman Oaks. You’ll find Dillon and company there nearly every Tuesday singing songs that have changed the way we move in the world, like hearing David Jackson sing, Some Broken Hearts Never Mend or Dillon sing his, Fearless Love or a Jimmy Webb song. I got to sit in and sing a Marjy Plant song, The Wheels of Love and Chuck Berry’s, Nadine. We also got to see song mixer extraordinare, Dave Way. Thanks to Dillon and friends for a big time.

On Wednesday morning we were off to Atascadero to stay with Charley and Anet, two of the greatest higher evolved beings on the planet. For years they presented the Brickyard Theater in their courtyard and now that the theater has drawn its final curtain, they on occasion host a house concert. We were also in the central coast to perform two concerts at The Screening Room at Cherent Ranch Studio hosted by Brent Keast.

Charley and Anet sometimes host the Tibetan Monks and it was our good fortune that one was staying with them during our visit, Geshe. I got to attend a meditation one morning that Geshe directed. Geshe made dinner one evening and served some delicious dumplings called popo’s. He was always smiling and ready to lend a hand. Thank you Geshe for your service and your smile. His service is to remind everyone to be mindful of others and to always try to be in the moment and pay attention

mug shot at Craig and Ali’s

Craig, Sue and Billy at the Brickyard Theater 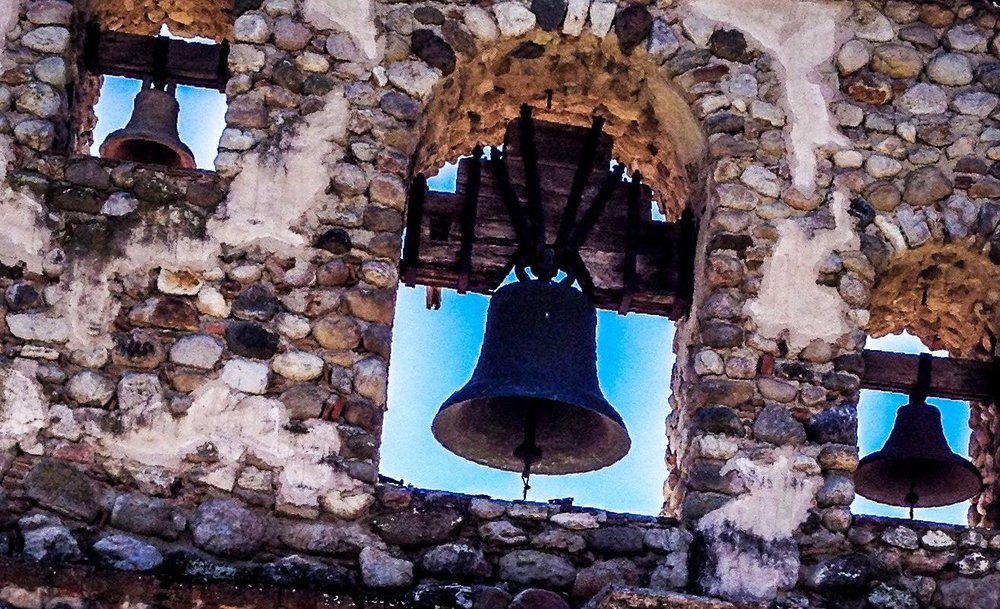 The bells at the Mission San Miguel…

Many thanks to Brent, Charley and Anet for hosting the central coast concerts. We had the best time with everyone and are looking forward to the next time.

This site uses Akismet to reduce spam. Learn how your comment data is processed.